I’ve recently been reflecting on back where my career started in earnest in the mid 2000’s, building virtual machines for a large web hosting provider. We were riding the wave of virtualisation – for every VM I built, we were decommissioning a physical server. It was an amazing feeling, going to vMUGs, literally pulling legacy equipment out of the datacenter just after we’d built it’s virtual replacement.

The organisation I worked for used virtualisation to build customer services more quickly. We saved money, while increasing our disaster resilience. We launched new products based entirely around a virtual machine, that would have been impractical in a physical world.

Virtualisation allowed us, and the rest of the industry, to shrink end to end provisioning time for a server from around 6 months to 6 weeks. A pretty dramatic improvement.

Along the way, the vSphere admin was born. They learnt entirely new skills. They automated. They got certified. They learnt networking and storage.

Now that we’re reasonably comfortable with our vSphere environments, we can see a new disruption on the horizon. The app’s that we provide infrastructure for are changing before our eyes. It’s predicted that we will see some 500 million new apps developed within the next 5 years. This is around the same as the total number of apps built in the last 40 years.

The good news is, these apps are predominately built on Kubernetes. And your vSphere environment is able to run these workloads, and your vSphere skills translate directly to the new world. We can get you from an app in 6 weeks, to 6 minutes.

Stay tuned for further Tanzu content, focused from the perspective of a vSphere admin. 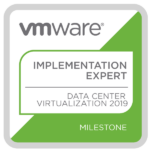